The material is used in a range of markets as a concrete alternative, providing advantages over traditional concretes including: greater speed and ease of install, reduced project costs, reduced logistical requirements and lower carbon emissions.

One of the more technical advantages is its durability and abrasion resistance properties.

How are traditional concretes affected by abrasion?

Abrasion erosion is a form of damage or wearing of an exposed material caused by contact with moving objects.

For example, concrete is often used to line water management or drainage channels. The water flowing through these structures often carries silt, debris and other materials. These particles sit along the bed of the channel during dry or low flow periods. Following heavy rain, the volume and velocity (speed) of the water flowing through the channel increases. As a result, the particles are swept downstream with the water and wear away the surface of the concrete. This is abrasion erosion.

Concrete erosion is also caused by chemicals (corrosion), sea or salt water (where erosion can occur at a more rapid rate), fire and freeze-thaw weathering. 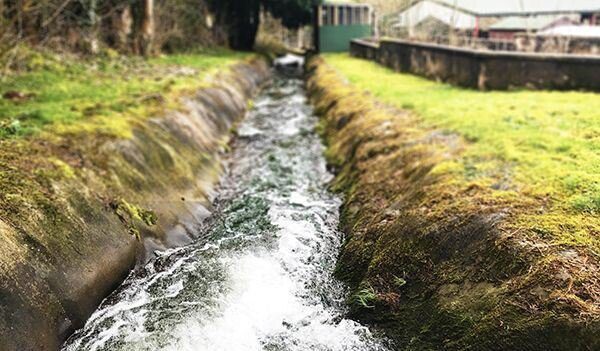 Establishing the effect of abrasion erosion on Concrete Canvas®

The abrasion resistance of CC was compared to the standard mix ST4 to BS 8500-2. ST4 is a poured concrete commonly specified for channel lining works in the UK with a 28 compressive strength of 20N/mm2.

The testing was based on ASTM C1353 ‘Test Method Using Taber Abraser for Abrasion Resistance’ and involved placing material samples under an abrasive rotating wheel. The depth of wear is recorded every 1000 revolutions (cycles), up to a total of 8000 cycles.

The lower the depth of wear, the better the abrasion resistance of the material.

How does CC perform compared to ST4 concrete?

After 24 hours of curing time, the cementitious material within CC showed a depth of wear of -0.198mm per 1000 cycles. Both the S2 and S4 variants of ST4 concrete were unusable as they had not cured sufficiently.

What do the results mean?

CC came out on top on all three tests, with a much lower rate of abrasion wear compared to the ST4 concrete variants.

Even after 24 hours of curing time, CC was able to withstand abrasion, while the ST4 variants failed.

CC’s unique composition means the abrasion of the material occurs in two phases. Firstly, in the top surface as this contains some of the cement mix found in the material’s core. The abrasion resistance of the CC top surface outperforms the ST4 S4 mix and therefore provides a good level of abrasion resistance. Secondly, the cement core of the CC material provides superior resistance to both ST4 S2 and S4 mixes, even in very abrasive conditions due to its high cement density.

As GCCMs are intended as an erosion protection solution, their high abrasion resistance is a key characteristic. The testing has demonstrated that the Concrete Canvas® GCCM has superior abrasion resistance to the typical concrete mix used for erosion control of drainage channels.

What is bank erosion protection?

These cookies collect information that is used either in aggregate form to help us understand how our website is being used or how effective our marketing campaigns are, or to help us customize our website and application for you in order to enhance your experience.

If you do not want that we track your visist to our site you can disable tracking in your browser here: