While motorway and trunk roads make up less than 5% of this figure, they account for over 38% of the total volume of traffic.

As the Welsh economy grows and the number of road users increases, the investment in infrastructure is also expected to increase to support demand.

In February 2018, the Welsh Government announced an additional £30m in funding for the improvement of local roads. While major improvements are important for keeping up with growing demand, councils also have to consider and budget for general maintenance works.

As councils, in conjunction with Trunk Route Agencies, also have the responsibility of maintaining assets such as tunnels and bridges, electrical infrastructure and so-called “soft estate” (highway verges and landscaped areas), prioritising where funds are spent is a continuous challenge.

Just a month prior to the Welsh Government’s budget announcement, the BBC reported on Swansea Council’s estimate that in order to clear the backlog of repairs to their roads, a sum of around £54m would be required.

With such a major deficit in funds for road maintenance within just one council jurisdiction, it’s no surprise that local authorities are unlikely to be able to maintain other assets without additional support and funding.

As a result, it is of paramount importance that councils find cost savings wherever possible to enable much-needed jobs and improvements to be carried out within tight budgets. Even seemingly minor improvements have to be budgeted for. Drainage works, as an example, can often be time-consuming, disruptive and costly.

A common solution for constructing or lining high-velocity drainage channels along roadside cuttings and embankments are poured and pre-cast concretes. The logistical requirements for transporting these materials to site and the heavy machinery needed for installation often result in lane closures and subsequent traffic disruption.

A number of projects over the last decade have used Concrete Canvas®, a unique class of material known as Geosynthetic Cementitious Composite Mats (GCCMs), as an alternative to traditional concreting methods. GCCMs are a locally manufactured concrete alternative which hardens on hydration to form a thin and durable concrete layer.

Concrete Canvas Ltd, based in Pontyclun, is the sole manufacturer of GCCMs in the UK. Commercial volume production of the material began in August 2009 at the company’s first headquarters in Treforest Industrial Estate near Pontypridd.

Established within the civils sector as an erosion control solution, GCCMs are typically used for applications such as channel and ditch lining, slope protection, concrete remediation and culvert lining, to name a few.

The unique properties of the material and the fact it is delivered to site on a roll allows clients and contractors to reduce project costs, time on site and greatly reduce, if not eliminate, disruption to road users. 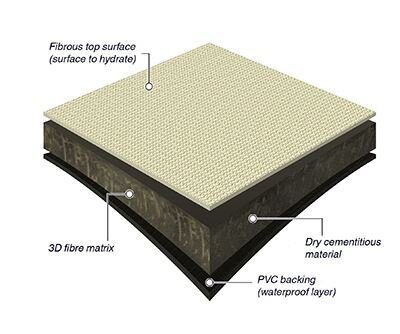 A project worth noting which specified the material class is the Five Mile Lane Improvements Project, which was included under the £30m Welsh Government budget and completed in September 2019.

The A4226, known locally as Five Mile Lane, is situated near Barry, South Wales and is one of the major routes to Cardiff Airport from the north.

The original road was essentially a narrow and winding country road which was largely unmaintained.

Plans for the Five Mile Lane project were submitted in March 2016, with works commencing in early 2018, and outlined a new two-lane 4km stretch of road situated east of the existing A4226 between Barry and Blackland Farm.

The planned route would allow for a smoother flow of traffic, improved safety and improved journey times. The improvements would also provide a more accessible route for those travelling to Cardiff Airport.

Concrete Canvas® (CC) was specified as an alternative to traditional concreting methods to line a newly constructed crest drainage channel on the eastern side of the new road. A protective lining solution was required to accommodate the anticipated volumes and flow rates while preventing scour of the invert.

The 8mm thick product variant (CC8™) arrived in ‘bulk roll’ format, allowing it to be cut to required lengths on-site to reduce wastage and laid across the width of the drainage channel. Material edges were captured within anchor trenches using ground pegs, and overlapping layers were jointed using stainless steel screws.

Once the installation was completed, the material’s unique cement mix was activated by spraying the fabric surface with water.

Within 24 hours, the flexible material had hardened to form a solid concrete layer and had reached 80% of its final strength, making it ready to use. After just 48 hours, the material was at full strength, providing a 120-year durability as certified by the British Board of Agrément.

In February 2010, Concrete Canvas® was specified by a road sector client in Wales for the first time. CC was chosen as a channel lining solution for crest drainage within the Church Village Bypass Scheme, just a few miles from the company’s factory.

The scheme had a £90m budget and was headed by Costain. Plans included road bridges, roundabouts and community footbridges as well as an extensive surface drainage network.

The contractor aimed to use alternative materials to minimise environmental impact. Following approval from the Environment Agency, Costain specified CC for use within the drainage network, protecting an existing channel which was unlined and overgrown. The material was installed in 45 minutes, compared to the 3 days originally planned using traditional methods. 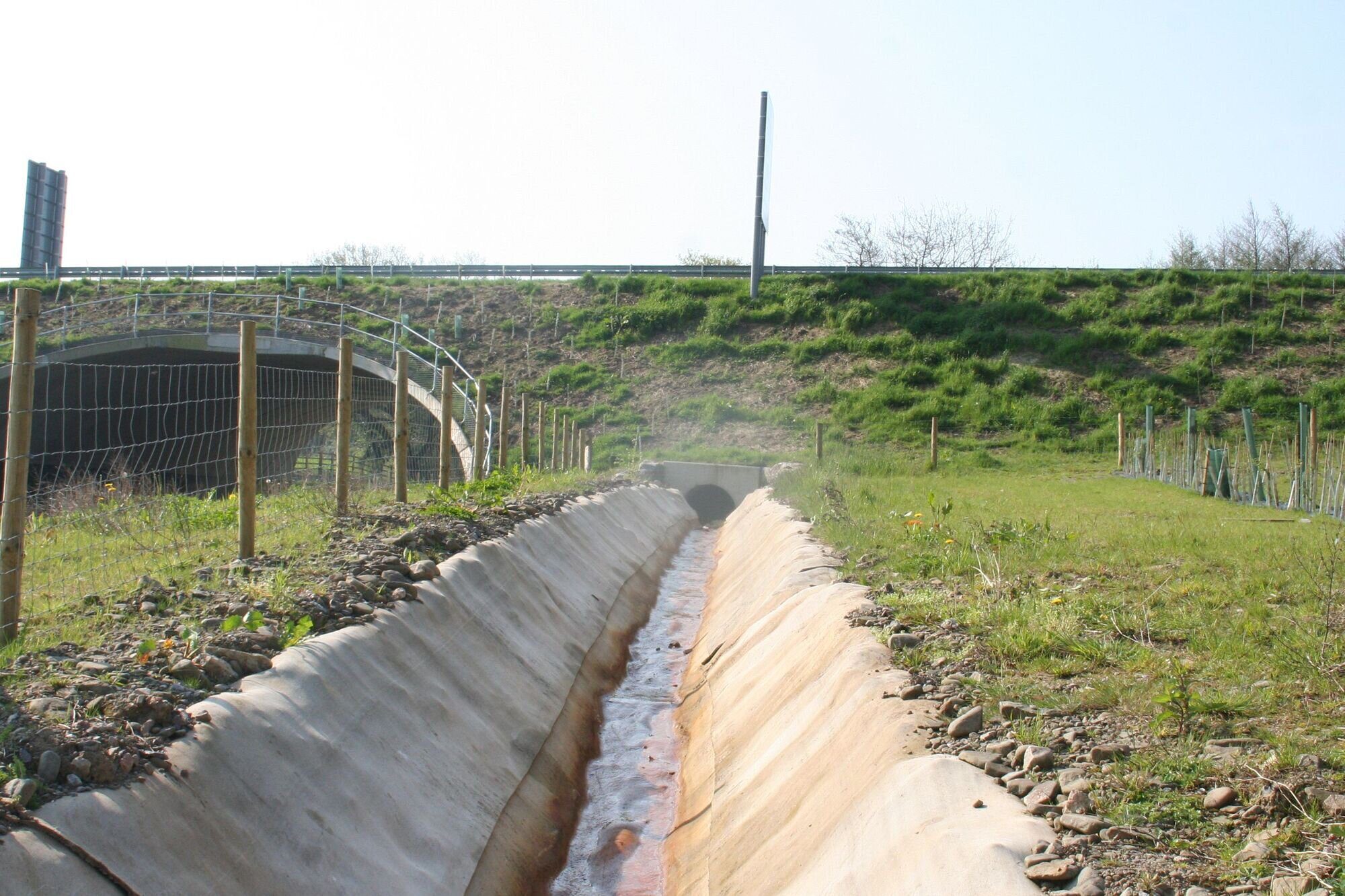 The A4060 in Merthyr Tydfil links the A470 at Pentrebach with the Heads of the Valleys road (A465) in Dowlais.

The majority of the A4060 was constructed on a steep hill and is overlooked by the Ffos-y-Fran land reclamation scheme site on the south-bound side of the carriageway.

At the toe of a hill below the Ffos-y-Fran site lies a large drainage channel which runs adjacent to the road, measuring approximately 410m in length with a variable profile of 5.5 – 10 linear metres. The purpose of the channel is to manage surface runoff from the hillside and protect the A4060 from flooding and undermining.

Over the years, the channel had been remediated using poured concrete, cement-filled sandbags and concrete slab work. However, each had failed to some degree and the channel was in disrepair.

In order to prevent undermining of the embankment, it was decided that the channel should be excavated, graded and lined with Concrete Canvas® to provide a long-term protection solution.

The works were carried out on behalf of client South Wales Trunk Route Agent (SWTRA), with design specifications produced by consultants AECOM.

The channel profile was widened in some areas and groundworks carried out in such a way that the gradients of steeper areas were decreased in order to prevent overtopping.

Weather conditions were challenging throughout, causing concerns that the ground preparations could be washed away. To prevent this, the team prepared the channel as works progressed. Installation of the material itself was able to continue as CC is workable for up to two hours following hydration, whereas installation of traditional concretes would be disrupted.

The project was completed over a four-week period by a team of six, with 2,875m² of CC installed in total. The re-alignment, widening and lining of the channel will protect the A4060 from flooding and associated closures, which would otherwise cause significant delays and cost to an important trunk route. 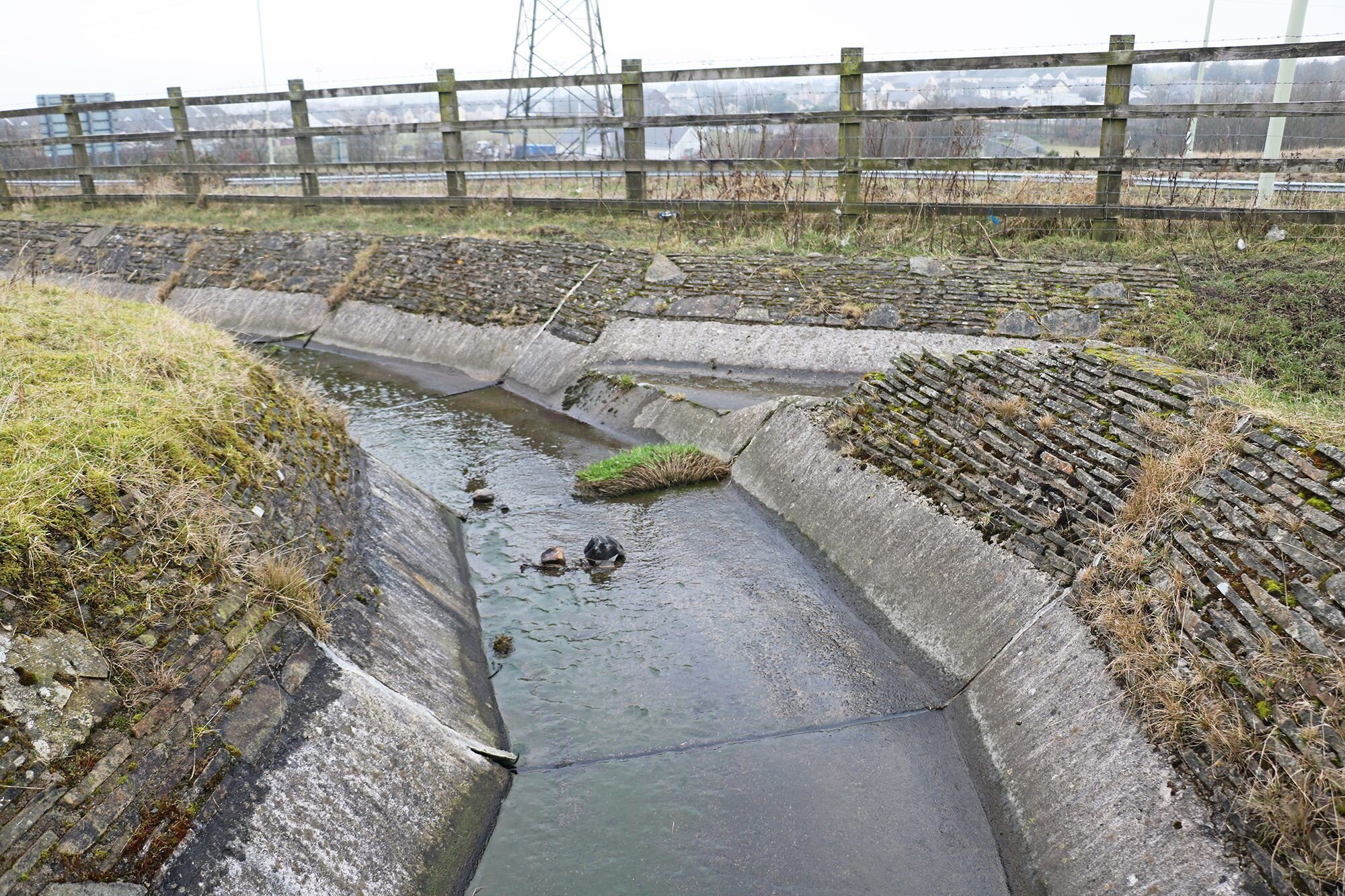 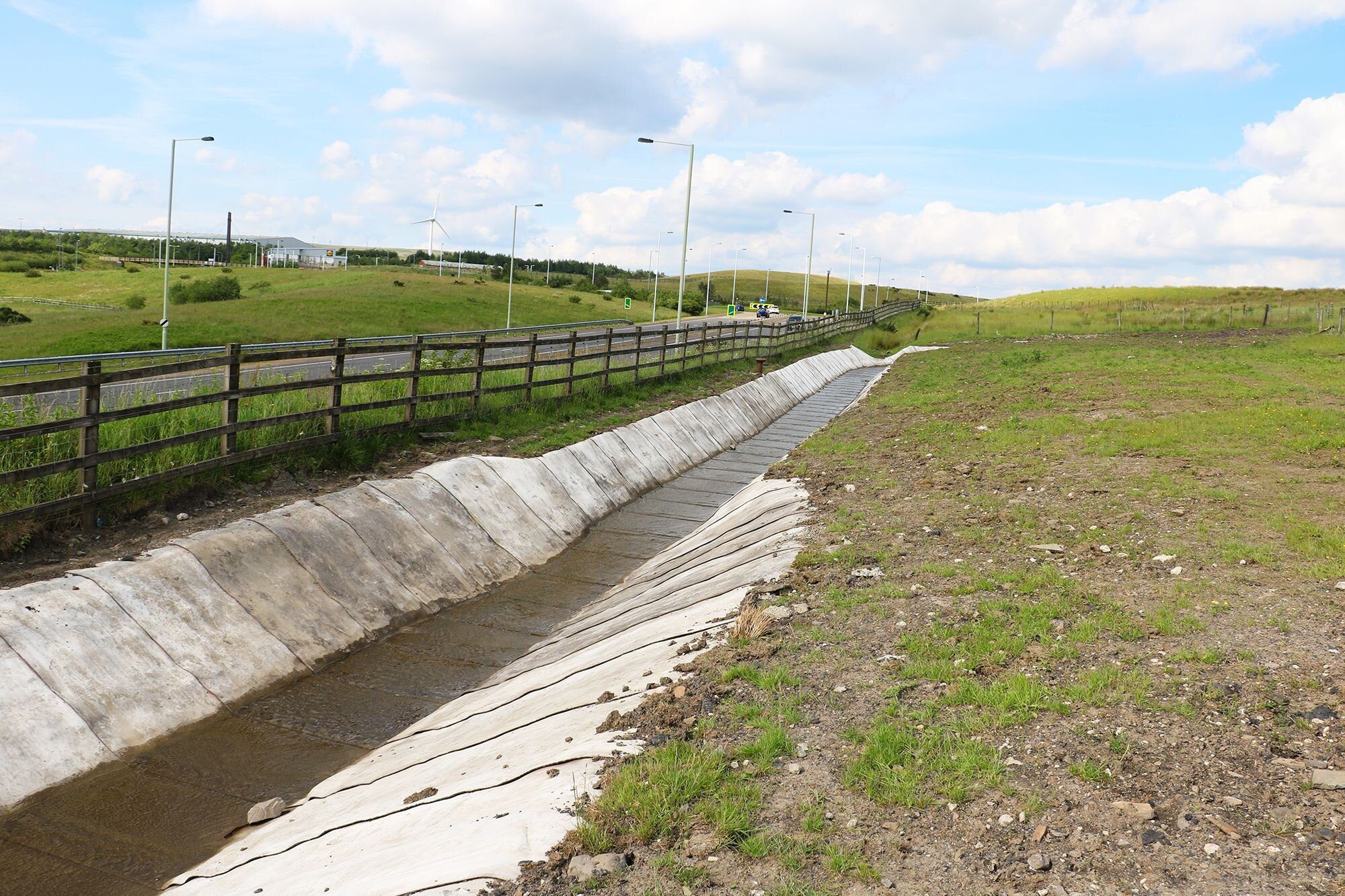 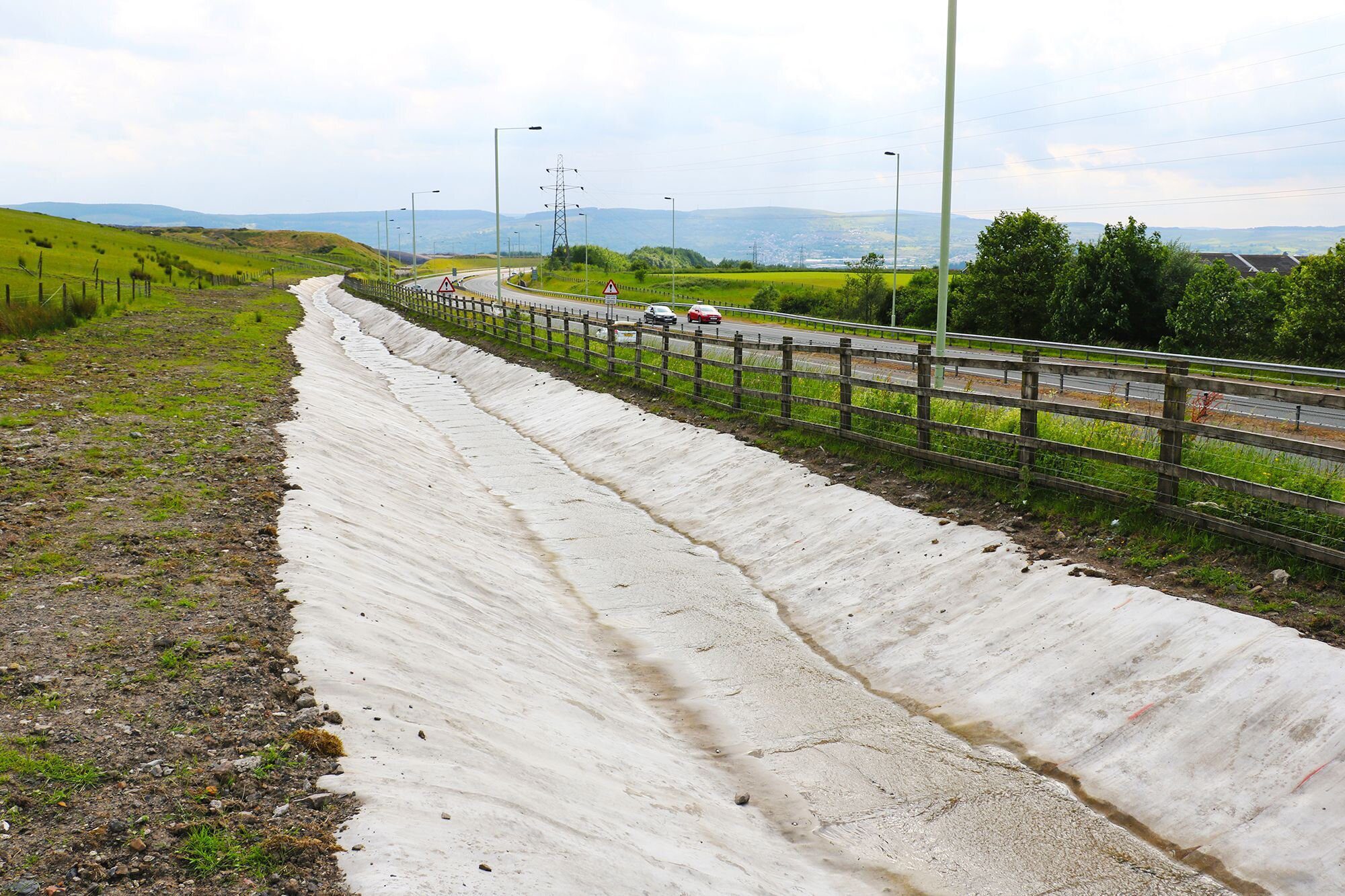 Can Wales’ road sector keep up with rail?

While Wales’ budgeting issues run much deeper than finding cost-saving solutions for maintenance, Concrete Canvas® is one of many innovative products that can be sourced locally.

Products like CC can provide solutions to ongoing issues and lead to cost savings which would provide local authorities with some respite and a chance to focus on road improvements like those required in Swansea.

As Transport for Wales works through their plans to provide drastic improvements to the country’s rail sector over the coming years, the Government and councils need to look for innovative and alternative solutions in order to bring the same level of innovation and development to road users.